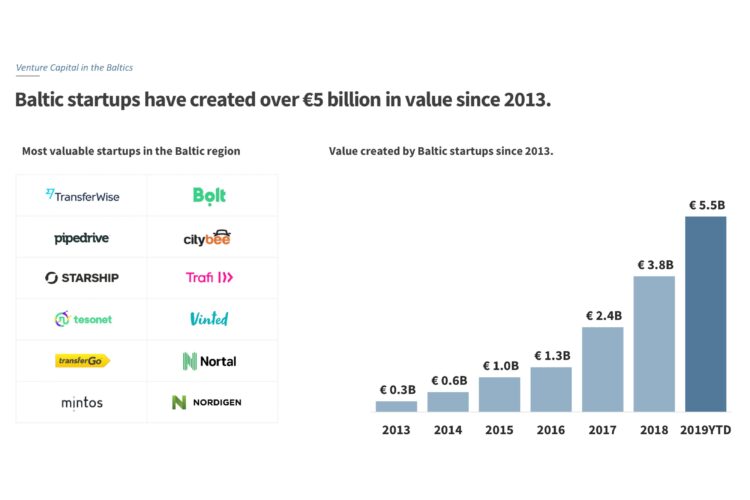 Baltic startups have created over €5 billion in value since 2013.  2018 was a record year for VC Investments in the Baltic states. The total amount of VC raised by companies in the Baltic States hit €534 million in 2018.

Across the Baltics, over €1.5 billion has been invested since 2013, as a result of several large VC rounds such as Bolt, Citybee, Monese, Vinted, Pipedrive, Starship. And its showing a substantial growth since 2013.

Venture Capital investments average growth from 2013 has been rising +88% in Estonia, while Lithuania’s growth rate is booming with +135%. Latvia is still in very moderate stages regarding startup growth and VC investments, compared to Estonia and Lithuania.
By invested venture capital, Estonia is still ranking #1, with €1,173B, while Lithuania is ranking #4 with €375M, according to the latest report.

One-third of the total unicorns in Central & Eastern Europe are created in the Baltics.

The Baltic region has created one third of total unicorns in Central & Eastern Europe, and 3% of unicorns in total Europe, worth a combined €12 billion. Estonia is leading the way in Baltics, with 4 unicorns: Bolt, TransfereWise, Playtech and Skype. While Lithuania has just crowned it’s first Unicorn Vinted, who raised €128M in a funding round that valued it at more than 1 billion euros, making it Lithuania’s first tech unicorn.

“For investors, it is surely interesting to keep a look-out to the Baltic and Northern European countries. Estonia has created a strong and proven track record of successful startups and is still strongly moving forward. But it is worth mentioning to keep a strong eye on the other booming countries, such as Lithuania and Latvia, who are showing a growing number of rising stars”, says Thomas Padovani from Bellon Invest.

The investments into Estonian startups are still strongly on the rise and the proven track record of creating internationally successful businesses, creates trust for future growth. “Of course, as the first digital nation on the planet, this also creates extra buzz and attracts more interest to look into Estonia,” says Padovani.

It is already clearly seen that the interest from foreign Investors is increasing in Lithuanian tech startups, especially from Western Europe and the USA. Like Estonia, as the leading country of digital technology and startup business scene, Lithuania is also strongly rising up with their business favourable & regulation friendly environment.

For more details, take a look at the report by Dealroom.co for more insights on the Baltic countries startup ecosystem.

Thomas Padovani, after stepping down from the CEO position of Adcash, is now strongly focusing on investing in to startups all over the world through his investment company Bellone Invest, keeping a strong eye and interest on the booming Baltic startup scene. Thomas Padovani, together with Webinfluence Group, was one of the first investors to the Estonian Unicorn Bolt.