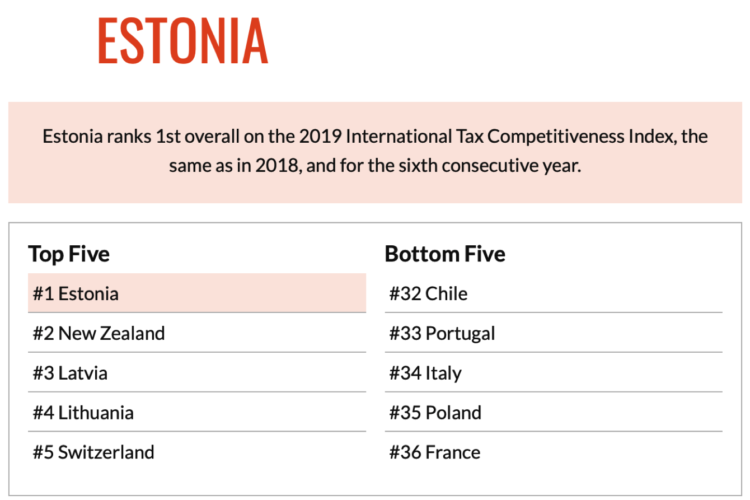 For the sixth year in a row, Estonia has the best tax code in the OECD, according to the freshly published Tax Competitiveness Index 2019.

According to Tax foundation, Estonia’s top score in 2019 is driven mainly by four positive features of its tax code:

A clear advantage of Estonia’s tax system is that companies spend less time on tax compliance than they would in any other country in the OECD. For example, in an average OECD country, 42 hours per year are used by companies to comply with just corporate income taxes. In Estonia, the figure is five hours. Other taxes, such as the value added tax (VAT) also have a low compliance burden.

Estonia is also among the few countries in the OECD that do not have any property transfer taxes, meaning taxes on the transfer of real property (real estate, land improvements, machinery) from one person or firm to another.

According to Tax Foundation, the structure of a country’s tax code is an important determinant of its economic performance. A well-structured tax code is easy for taxpayers to comply with and can promote economic development while raising sufficient revenue for a government’s priorities. A competitive tax code is one that keeps marginal tax rates low.

In today’s globalized world, businesses can choose to invest in any number of countries throughout the world to find the highest rate of return. This means that businesses will look for countries with lower tax rates on investment to maximize their after-tax rate of return.

If a country’s tax rate is too high, it will drive investment elsewhere, leading to slower economic growth. In addition, high marginal tax rates can lead to tax avoidance. According to research from the OECD, corporate taxes are most harmful for economic growth.